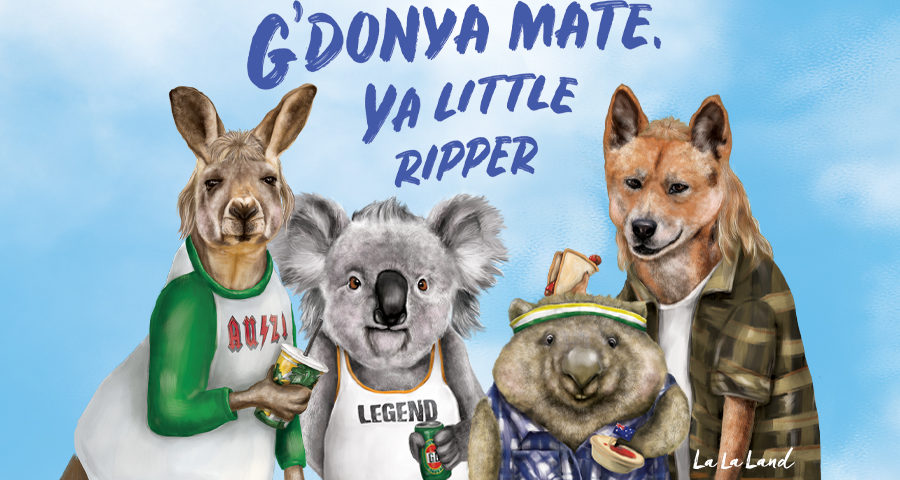 Australian English, aka Aussie lingo, reflects very well its users’ laid-back attitude to life in general. Life and all its aspects is to be enjoyed, had fun with and kept uncomplicated if possible and language is no exception.

Before I met any Australians and got an insight into this whole linguistically-different realm, to me a barbie was a kind of doll , Oz was the land of one wizard that Dorothy and her mob tried to locate and crocs were what I considered a rather ugly type of footwear. With time I learnt that in the land Down Under a barbie was a widely-used alternative for a barbecue, Oz was another name for Australia and crocs was the preferred name for Steve Irwin’s fave animal species-crocodiles.

Australians, aka Ozzies or Aussies, have a love for diminutives and informality and the language born out of that love is definitely a curious, if not the most endearing, thing. In most cases, the main method is to get rid of unnecessary syllables and add an ‘ie’, ‘o’ or ‘y’ at the end. In this fashion, sunglasses become sunnies, husband is changed to hubby, and a biscuit is too serious a word for a bickie. The list goes on. People give each other prezzies at Chrissy (presents at Christmas), offer you a coldie (a cold beer) or ask what you’re doing this arvo (this afternoon). In the street you see ambos and garbos (ambulances and garbage trucks respectively), while milkos and posties deliver things to your house (milkmen, postmen). You call a cabbie when you need a ride and go to a servo to fill up with petrol. Adjectives share the same fate of having unnecessary syllables chopped off and so in Oz food tastes delish, views are specky and time with your mates is very spesh. I could go on, but I am sure you get my point.

Curiously enough, Straya (yep, we’re still talking about the same country) was the first place in the world where in a few locations McDonald’s changed its name to Macca’s since this was, and still is, the nomenclature of choice here.

Another interesting fact, Aussie lingo is not just reserved for informal conversations by the barbie. Schools recruit children for kindy, commentators on national television talk about the footy season while the Prime Minister refers to superannuation (a kind of retirement fund) as super. When you think about it, superannuation is a six-syllable word. I mean, why bother? Australia’s three main charity organizations are called Salvos (short for Salvation Army), Good Sammy (short for Good Samaritan) and Vinnies (short for St Vincent De Paul Society). I’m sure Jesus doesn’t mind.

No subject is considered too serious to be spared in this endless play with words. Even the rather grim coronavirus pandemic has inspired the creation of new words like iso (isolation) and hansan (hand sanitiser). I wouldn’t be surprised if someone referred to funeral parlours as funnies (pronounced fyoo-neez).

Aussie lingo is a very expressive language too, full of quirky little exclamations for whatever occasion might arise. The phrase you’ll hear most often is one that you’ll all have heard before. It’s ‘no worries‘, usually supplemented with ‘mate‘ (we’re all buddies here, you know) which reflects perfectly well the approach to life where absolutely NOTHING is worth fretting about.
‘I’ve spilt red wine on your carpet.’ ‘No worries, mate.’
‘I have just rammed into your 4wd.’ ‘No worries. All good.’

‘Awesome’ is an incredibly versatile phrase used as a response to virtually anything and can be intensified by adding ‘bloody’ or ‘freaking’ in front. Check out the video from the previous post to see how it’s used most often. ‘Crikey!‘ is your word of choice for expressing surprise, as in: ‘Crikey, fancy seeing you again after you disappeared in the outback for yonks!’ Then there is ‘strewth’ for expressing annoyance: ‘Strewth, they’ve closed down the bottle-o round the corner!’ ‘You beauty!’ can be overheard quite often at footy matches when commenting on a specky (a spectacular mark). Last but not least, ‘Far out!‘ is an exclamation of amazement or enthusiasm as in: ‘A new prime minister has just been elected.’ ‘Far out! That’s the third one this year.’

The pronunciation is another story with its nasal sounds and a tendency to make words such as like and kite sound more like loike and koite. I sometimes think the way Aussies pronounce water, it should be spelt watar. Also, you can’t fail to mention the quirky intonation that makes every sentence sound like a question.

Aussie lingo has to be heard to be appreciated. That’s why to get a sample of a broad Australian accent I recommend watching Crocodile Dundee or one of Steve Irwin’s programmes or, for more general pronunciation and more up-to-date content, an interview with top comedian Adam Hills.

For me Australian English is a fair dinkum testimony to its users’ character and reflects perfectly well their not so serious attitude to life, their love for the informal, their candour of expression and genuineness of emotions. It’s a language devoid of pretentiousness, just perfect for making a spontaneous, friendly, relaxed, conversation with everyone and everywhere, which is what it is used here for so often. So next time an Aussie mate invites you over for a barbie or din-dins, reply with ‘Awesome. I’ll bring a few coldies and some tucker. See you at your joint this arvo.’