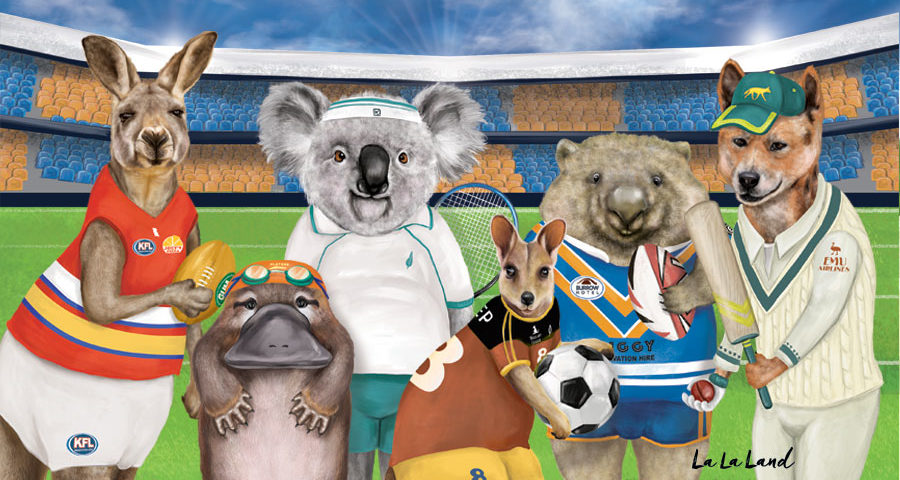 The three main sports/religions in Australia are AFL, short for Australian Football League, cricket, and rugby. Why AFL is called football if you can catch it, throw and run with it in your hands is a bit of a mystery to me. When it comes to cricket, I don’t have the patience to wait four days to see who won. And for the shorter formats of cricket, it seems like there are way too many players just hanging around waiting for some action to happen. Regarding rugby, the requirements are the muscle power of a stallion and the mortality of superman. This is the gladiators’ game. How a rugby match doesn’t end in at least a few casualties is beyond me. However, the main focus of this post is not the rules of sport, which clearly I am not an expert on, but the incredible spirit sport evokes.

The hardest thing during the pandemic lockdown in Western Australia wasn’t the limited freedom to venture out of your house, the limited supplies, the poor social life. It was the lack of footy as all matches had to be put on hold. I stared in awe as my AFL freak of a husband watched on tv with genuine excitement and anticipation the replays of past matches whose results had been determined years back! You have to have an Australian brain to relate to that, I think.

My attitude to ball sports is similar to that of Moss’s from the IT Crowd, “Hurray, he’s kicked the ball…now the ball’s over there…that man has it now..that’s an interesting development..maybe he’ll kick the ball…he has indeed and apparently that deserves a round of applause” I have to admit it, though, I love the spirit sport in Oz brings out in people- the togetherness, the bonding spirit, the shared joy, excitement and anticipation. Everybody goes for one team or another, sport is always present in conversations, toddlers and grandmas go to footy matches The supporters of opposing teams sit next to each other, the atmosphere is that of euphoria. An AFL match can attract a crowd of 100,000 spectators which is significantly impressive considering Australia has a population of just 25 million. I’d risk the statement The Pope’s visit wouldn’t attract a crowd as big. Sports legends are big rolemodels. It’s what I feel sport should be all about.

I can’t help but make a comparison between European football, called soccer here, and Australian Rules Football.. In soccer acts of hooliganism are rife, hostility towards the opposing team prevails and supporters of opposing teams often have to be seperated to prevent violence, police vans are parked outside the stadium. Another difference is in the players. They can be bought and handed over from club to club for extortionate amounts of money, and as a result the richest clubs end up with the best players. That is not the case with AFL where salary caps are imposed to ensure a level playing field for all clubs. Another big difference is how you play. Unlike soccer, AFL is no game for soft boys and foul feigners. If someone bashes you on the head, knocks you down, pulls your t-shirt or kicks you in the face, it’s just bad luck. Dust yourself off and keep playing. I like that.

Of course sport Down Under isn’t just limited to those three games. People love their tennis and their golf, go surfing and cycling, play basketball, soccer and softball, work out, jog. Sport is not seen as privilege, it’s a lifestyle. Within a two kilometre radius of my house there are THREE public sports ovals the size of three soccer pitches with free tennis and basketball courts and outdoor gyms. Sport is also seen as an important part of every kid’s education and swimming lessons are part of the national curriculum. Also, students are encouraged to try out different types of sport- grass hockey, tennis, athletics, frisbee, discus throw to see which one they like best. I feel that in times when we’re permanently all glued to our smartphones and laptops, engaging in a sport has never been more important. So slip on your trainers, grab a bat/a racket/a club and have a ball.