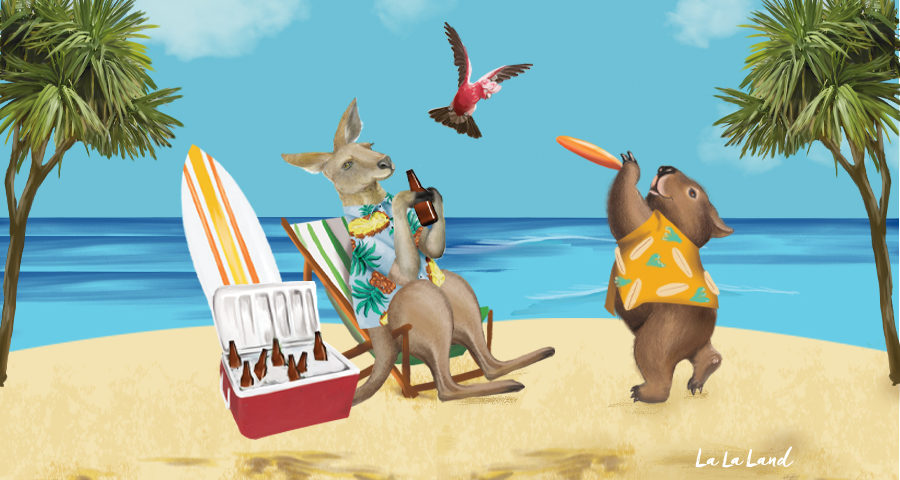 The concepts presented in today’s posts are essential elements of the Australian culture, yet these concepts might leave a foreigner puzzled and confused. If you’re planning a trip this way, you’d better read on.

The word you will hear the most in Australia is mate, which pretty much sums the relations from anyone to everyone in this country. Strangers who pass you by will greet you with, “How are ya, mate?”. Your close friend will enquire about your wellbeing in exactly the same mode. Parents call their kids mates. You’ve got mates at work and mates at school. If you ram into someone else’s car, the owner of the said vehicle will also refer to you as mate, something like, “Need new glasses, mate?”. Although in this case, mate will serve as a synonym of idiot. You have to work it out for yourself what kind of ‘mate’ you’re being referred to.

Ozzies love outdoor living – from barbecuing to playing sport, to camping, to fishing to just chillaxing on the verandah. They also like their drinks ice cold and these two inventions in question, namely an esky and a stubby holder, do a great job keeping any beverage nice and chilled in outdoor conditions. An esky is essentially a well insulated box with a handle that you fill up with ice and your drinks of choice. It’s a basic version of a portable fridge. A stubby holder is a sock you slip on your brewsky or any other beverage for that matter to stop it from going warm. Both are considered essential possessions. A respectable Australian household might lack an expensive tableware set, but it is bound to have an esky and at least a couple of stubby holders. Priorities first.

Remember the opening scene from Shrek? The one where he shuts the door of his long-drop toilet behind him laughing “Like that’s ever gonna happen?” That outdoor loo is a dunny. And if you thought those only existed in fairy tales or were a relic of the past, you’re in for a surprise. Dunnies are very much present Down Under. You can see one when you go camping or out the back of old cottages. Going into a dunny can be quite an experience in itself too, as they tend to be inhabited by various species of the animal kingdom, being an outdoor feature.
Sometimes pubs and restaurants call their indoor toilets dunnies too, which is information you might find handy if you’re busting and the word toilet is nowhere to be found. Look for ‘dunny’ instead. You’re welcome.

Australians’ relationship with shoes is a curious one. On most occasions thongs (aka flip-flops in the UK) are considered suitable footwear. I’d swear it’s the only footwear most Australians possess, worn all year round whatever the weather and the circumstances. What is more, it’s not uncommon to see an Australian wearing nothing on their extremities at all. And if you feel that the occasion you’re attending requires footwear, but you’d rather walk barefoot on the grass, here’s an option that will keep you pleased. Check these out!

In most countries people commute to work, in which case they might catch a train or a tram or a bus or a taxi or simply just drive. In Australia, if they work at mine sites, they catch a plane. If they chose to drive, they wouldn’t get to work until three days later as most people live near the coast and most mine sites are in the interior, hundreds or thousands of kilometres apart. The term that denotes the concept of flying into and out of work is called FIFO, short for fly in fly out. Rather than relocating employees and their families to towns near the work sites, the workers are flown to the work sites, usually mine sites, where they work for a set number of days and then are flown back to their hometowns to rest for a number of days. Out of 2.5 million Western Australians, around 60,000 are FIFO workers. FIFO often pops up in conversation as everybody knows someone who is a FIFO worker and there’s always talk of FIFO this and FIFO that. So next time you’re in Oz and someone mentions FIFO jobs or FIFO parents, you won’t need to react with a blank expression on your face.

So here are 5 quirky Aussie concepts for you. I wonder what facts you’d point out, if you were to write about your country.